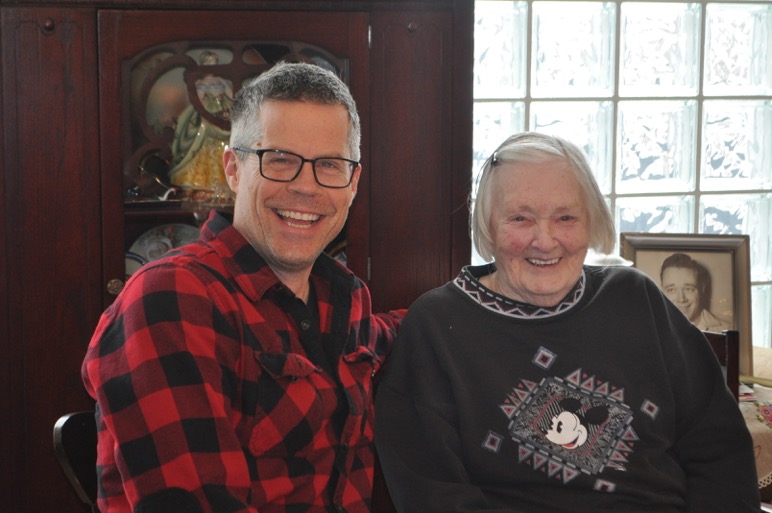 Posted at 03:03h in Featured by admin

Last week was a big week for John and Tess. Late Sunday night, we got a text from Blythe’s mom in St. Albert saying that her 90-year-old mom, who had been in the hospital for awhile, was unresponsive and it looked like things were coming to an end. Blythe told John and Tess the news Monday morning.

Johnny burst into tears. His Great Grandma was dying. Other than a fish the year before, it was the first time he or Tess had faced someone close to them dying. You could see the wheels turning in John’s head, and through his tears he said:

“Mom, I want to go up there right now and say goodbye.”

We explained that St. Albert is a four-hour drive and that Great Grandma was in a coma, so she might not even know he was there. He didn’t care. “I want to go say goodbye,” he said. “Me too,” said Tess.

So Blythe called the school to let them know the kids would miss the day, figured out her work schedule, then piled the kids into the van and off they went.

Blythe’s mom (Grandma Shirlee) met them at the hospital and brought John and Tess to Great Grandma’s side and explained that she could hear them even if she looked like she was sleeping. Grandma Shirlee is amazing – her own mom was dying and she patiently explained everything and answered every question John and Tess had. They both said what they needed to say, then they told Great Grandma they loved her and said goodbye.

And then they drove back home.

And a day later, Great Grandma Terry O’Neill was gone.

If there ever was a “Matriarch” of a family, Terry O’Neill was that matriarch. Apparently her temper and force of will were legendary back in the day. When speaking of someone who has just passed away, it’s rude to use words like  “battle axe,” but if ever there was a battle to be had and an axe was needed – especially to defend, protect… or straighten out her kids – no one could swing an axe like Great Grandma Terry. By the time grandkids showed up, she had mellowed a bit. And by the time John and Tess and the other great grandkids showed up, she was almost a softy. Almost.

I never had a great grandma, but if I ever did, I’d hope she’d be as great as Great Grandma Terry.

John was right to want to drive up and say goodbye. Tess was right to be there with him. And if ever there is a battle to be had, or a cookie to be baked, I like to think that somewhere in their hearts, Great Grandma Terry will be right there with them.