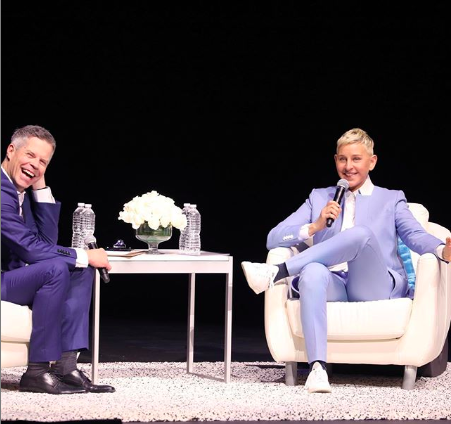 Posted at 18:35h in Featured by admin

We are up to our ears getting ready for our Valentines’ DKL coming up.

Juno Award winner Sean Jones is bringing his incredible music from Toronto, he’s going to mash it together with our own Flat Whites and it will be the most love-filled-even-if-you’re-not-romantic evening. You’ll love it even if you’re not in love. You’ll see.

My brother Rob and I were at the Hard Rock Hotel… in Miami… Super Bowl Central… and this is how we watched the game.

And this is why. It’s Ellen’s fault.

As some of you may have heard, I went down to Miami because Ellen Degeneres was doing a big show during Super Bowl weekend and she wanted me there to sit in the other chair with her. She liked what we did during her Canadian Tour and wanted to see if it translated to the US.

It was some of the biggest pressure I’ve felt for a long time.

As some of you may have heard, I went down to Miami because Ellen Degeneres was doing a big show during Super Bowl weekend and she wanted me there to sit in the other chair with her. She liked what we did during her Canadian Tour and wanted to see if it translated to the US.

It was some of the biggest pressure I’ve felt for a long time. The Canadian shows were pressure – but for some reason, being in the States, with her crowd, her crew, the US media… I don’t know. I was so full of anxiety around if it would work, if she’d be bored with what I brought… I was sweating for weeks before I even left.

So I wrote and re-wrote the show. I came up with new bits, with audience participation bits, funny bits, meaningful bits. I had enough for a 7 hour show. My brother Rob came with me to run the photos and videos we’d use in the show. We reviewed the show on the flight on the way down.

Then we arrived at the Hard Rock. That place was loud. I mean LOUD. The lobby was packed, the casino was packed, the music was pounding, lights were flashing… it was crazy. It was the Calgary Stampede, The Grey Cup, The Red Mile all wrapped into one massive crowded frantic party.

We went to the 6,000 seat theatre and rehearsed

Rob went over all the tech stuff with the tech folks.

We tested out the chairs.

And then the crowds came in. Thousands of frantic, excited, loud Ellen fans.

I sat in my dressing room, sweating, going over the script, going over my questions… and then I did something I don’t do very often. I threw the script away and walked onstage. I figured I knew it, I didn’t need a crutch, I’d just see what happened.

And it was great.

It was like a reunion. Me with her, her with her fans. We laughed a lot, I asked a lot of questions and she told some great stories. I asked questions from the audience, (my favourite: “What does Justin Timberlake smell like?”)

And the hour flew by.

Then she said goodbye, the audience stood up and screamed… and then we walked offstage.

She put her arm around me and said, “Well – I wasn’t sure if your Canadian would translate down here – but it did.” and we both laughed. Portia gave me a big hug. (I just like writing that) and we were done.

I was so happy and relieved at the same time  I could hardly walk.

I didn’t sleep much that night. The next day we sat by the pool. I didn’t rehearse anything. I didn’t talk to anybody. I just sat there.

And when the game was about to start, we stood in the jammed casino, lights flashing, bells ringing people yelling, and I looked at Rob and said, “How about we just go somewhere quiet?”

I was glad the Canadian translated.