It’s All About The Research

20 Mar It’s All About The Research

Posted at 05:16h in Featured by admin

Mike is the Executive Producer of Dave Kelly Live and he is constantly on me about getting this blog written. I told him I had no ideas this week. And I was eating chips.

He was all, “What about the Grand?”

That’s the fantastic space the show is moving to starting next month. “It’s a theatre,” I said. “What else can I say about it?”

“Have you done any research on it? Anything at all?”

Fine. So I did some research on the theatre. And by research, I mean I looked it up on Wikipedia. It was built in 1912, when Calgary had a population of 50,000. At the time, it was the biggest theatre in the Pacific Northwest.  For 50,000 people? Really?

I took out my calculator and did some quick math – if we built a theatre today that had the same ratio of Calgarians to seats it would hold about 36,000 people. That’s a big theatre.

Wikipedia also told me that Fred Astaire had performed there. Along with the Marx Brothers And George Burns.

Wow. Those are some great guests. Unfortunately, they’re dead.

I clicked on Fred Astaire. That guy did a lot – he started as a child performer in Vaudeville in a brother/ sister act, and they performed in a string of theatres called the Orpheum Circuit, of which the Grand was one.

Then I clicked on Vaudeville and found out it was a style of live theatre performance that lasted up until 1930 and was a show with a series of unrelated acts – comedy, acrobats, music, freak shows, and animal acts.

Then I clicked on animal acts and saw that you can train a chicken to ride a skateboard. They even had a picture. 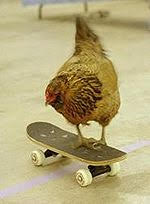 Oh yeah. We’re doing a show at the Grand. Now called Theatre Junction Grand. I told Mike we gotta get us a chicken.