My Mom, Paul Brandt and The Queen of England 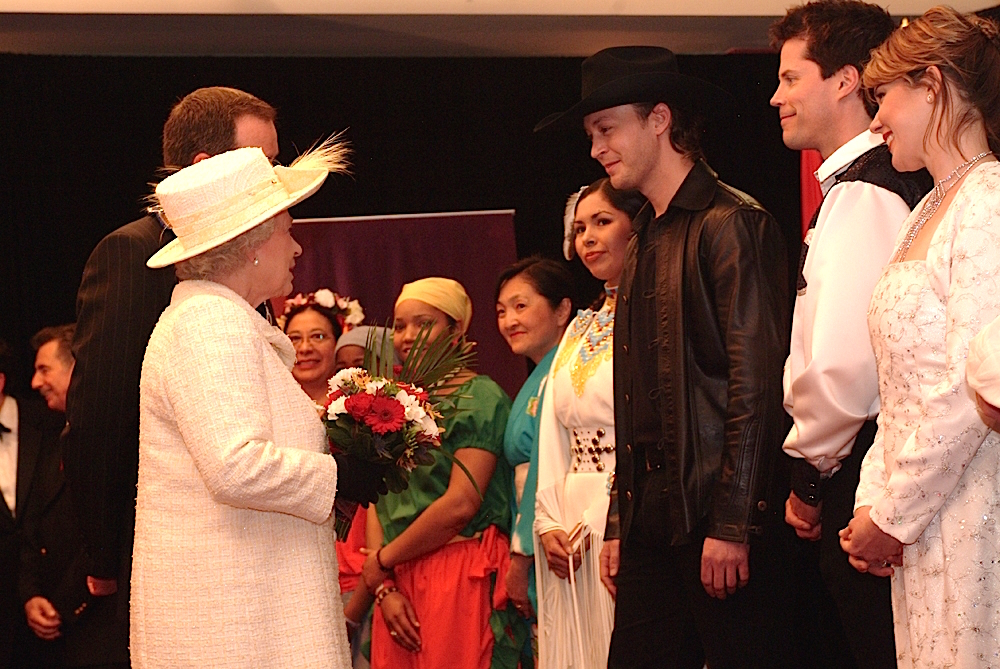 01 Feb My Mom, Paul Brandt and The Queen of England

Posted at 18:43h in Featured, Uncategorized by admin

Mom and Dad don’t have a TV. I grew up without a TV. We had a radio – but that was mostly for listening to hockey games.

So even though I spent every day for almost 15 years on television, even though I’m still on TV a fair bit – my Mom (and Dad) have never seen me on TV. It was never something they were impressed by or all that interested in. They liked that I had a job, but that was it.

They aren’t celebrity watchers, Mom wouldn’t know George Clooney from Lady Gaga. She was never that interested in anyone I got to meet or talk to. She’s never asked for pictures of me with anyone.

Until I met the Queen of England.

That picture was on the fridge at Mom and Dad’s place for a long time – competing for real estate with grandkids’ drawings and prayer cards. It stayed there until the corners wrinkled up and the tape dried to the fridge door.

My Mom would have been 13 years old when The Queen was crowned. It was huge international news then and I assume huge news for an impressionable teenage girl in Ottawa. And for all of Mom’s life (so far), the Queen has always been there, our Queen. Royalty. Distant, very distant, but somehow familiar.

Then, in 2005, Queen Elizabeth and Prince Phillip travelled to Canada and to Alberta as part of Alberta’s 100th anniversary.

There was to be a big celebration at the Calgary Saddledome and Bill Avery, the producer of the show, asked if I would MC the event. It would be my job to warm up the audience, review protocol (I had to tell the audience not to “Yahoo” when the Queen walked in). The show was spectacular, with a cast of hundreds of people and a special song written and performed by the pride of Alberta, Paul Brandt. And although it wasn’t exactly a private audience, it was a rush to know that I would be in the same room as Her Royal Highness. Just me, The Queen, and 17,000 of our friends.

Even though we were told that the way the show was set up, no one would be anywhere near the Queen, it was still a thrill. I stood at our stage, across the entire saddledome from the dignitaries area, and we put on a show.

Paul Brandt was his warm, engaging, star-without-acting-like-a-star self, the rest of the show was massive and everyone stood and cheered at the end. And then, after the dignitaries left their area, the bows finished, I walked backstage and Bill came up to me and said, “Come with me, come with me…” and he and some official people rushed a few of us down the back halls of the Saddledome. On the way, one of them said, “When you meet her, she might not speak to you. If that happens, don’t say anything to her. And don’t touch her for any reason.”

By this time we were racing down a hallway, turned a corner and someone started lining us up. “And you don’t have to kneel, but it’s good to bow your head.”

Paul Brandt to my right, and great Canadian singer and actress Jennifer Lyon on my left. I was about to ask Jen what a head bow looked like when suddenly, there she was. The Queen of The Commonwealth, Her Royal Highness, Our Monarch, walking toward us. She looked shorter, but exactly like she looks on our money.

She stopped to speak to one of the cultural performers, said a quick word to Marcie Meguinis, a talented aboriginal performer, and then stopped to talk to Paul Brandt. By now I was really nervous and thinking do I bow? Do I just look down? What do I do? I looked up, she was finishing up with Paul and I could feel a dumb smile plaster my face. Then she looked at me. I kind of bowed, and then I could see her deciding whether to talk or not and finally she said, and I quote:

And I was already panicked with whether I tilt my head, bow, kneel down, or what. What do I do? What do I say? There was a brief moment where I thought about throwing up a high five. But then I did what I do in those situations (situations where I’m meeting the Queen of England) I smiled and said, “Mmm hmm.”

And then she was gone.

That was it. My great words of wisdom to Her Royal Highness were “Mmm Hmm.”

When I saw the picture, I was surprised at how relaxed and happy I look. I didn’t feel that way. But I gave the picture to Mom and for the only time in her life I think she was a bit star struck. She asked, “Was she nice? What did you talk about?”

I told her she was very nice and we mostly talked about the show.

Which I believe is true.

And I can admit that it wasn’t much of a conversation to you because not only do Mom and Dad still not have a TV, they don’t have a computer or any connection to the internet. So they won’t read this.

Unless you tell them.

==
Come see Paul Brandt and I talk about our experience with the Queen at Dave Kelly Live at the Grand – on Valentine’s Day, February 14th.