The Back Alley’s Back 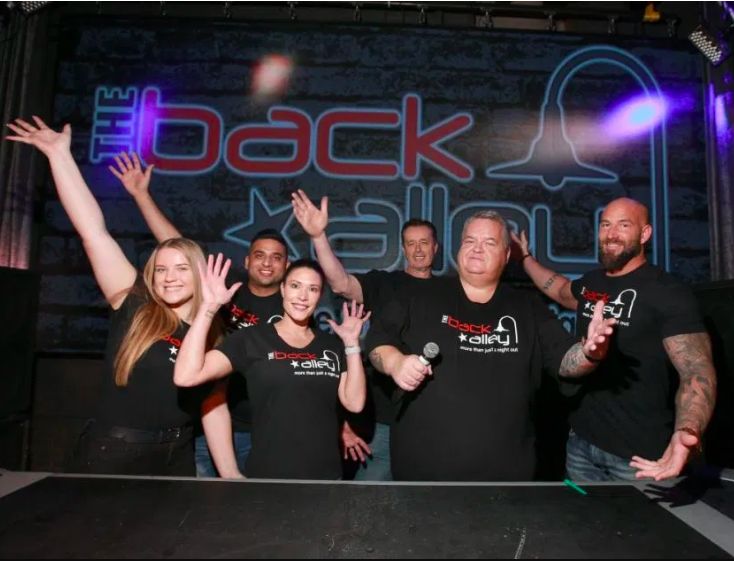 26 Dec The Back Alley’s Back

Posted at 09:17h in Featured by admin

So I’m surrounded by wrapping paper, presents, music, and especially Blythe, John and Tess. I’m so grateful, and I have to thank the people responsible for all of this … Motley Crue, AC DC and Def Leppard.

Fifteen years ago I met Blythe at a fundraiser at the Jack Singer. It was a very stylish affair, people dressed up, danced and raised money for AIDS Calgary.  (see… I’m classy right?)

And the night ended … at the Back Alley.

Now if you don’t know the Back Alley, it was a legend, an icon, a destination. It was THE rock nightclub of Calgary that was home to some great live acts, rock music, and a lot of people who wanted to forget their troubles by BLASTING THEM OUT.

And why did we end up at the Alley? Well, because Blythe used to work there.

“Oh,” you say, “Did she work in accounting? Or in the marketing department?”

We’ll get to that.

But let’s just say it was a pretty special, pretty loud, pretty great night. It ended with AC DC’s Thunderstruck and a screaming room of people throwing thousands of napkins in the air and Blythe and I dancing in the middle of it all. How can you not fall in love, right?

And for the next few years – every now and then it would be late on a Friday or Saturday and Blythe would get that look in her eye and I knew where we were headed.

And you might say, ‘Uh… Dave… you weren’t exactly 23 when you were dating Blythe. Weren’t you a little old for the Alley? Did you bring your own earplugs?”

And we had a riot.

And you might ask, “What exactly did she do there?”

My amazing wife, the one who manages our finances, who helps the kids with their reading and math, the one who does tremendous work in the not for profit sector in Calgary…paid her way through University by selling tubs full of beer to a nightclub full of screaming partygoers … at The Back Alley.

So whenever we went, it was a homecoming for Blythe and we would get the rock star treatment. We’d go in through the back door, head straight for the bar in this insane nightclub, and then jump around to the music like the young people we pretended we were.

But after decades of greatness – the Alley shut down. And we got married. And we had kids.

But just when you thought there were no more presents to unwrap… I have one more.

The Back Alley is Back.

After 6 years – it’s time to rock and roll people.

They are promising to have the biggest and best of everything in Calgary’s first Mega Club.

I have a feeling I’m well past the target market for the Back Alley, but every now and then, Blythe will look at me, I’ll look at her, and I’ll reach for my earplugs, my knee brace, and my dancing shoes and we’ll go back to where it all started for us… The Back Alley.

If you go – look for the ones selling beer. They could be the parent of your kids someday. Isn’t that what Rock and Roll is all about?

Happy Holidays… and rock on.

Calgary, Dave Kelly, The Back Alley