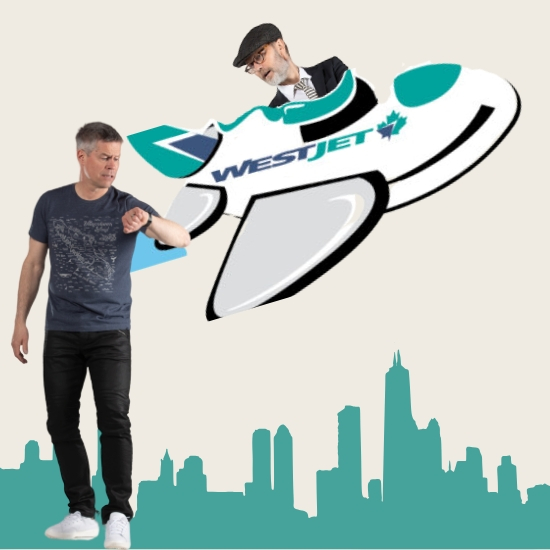 Posted at 02:23h in Featured by admin

Before we go any further, I have to say that Westjet sponsors Dave Kelly Live – and this story has nothing to do with that… except it involves Westjet.

So who wants a funny story about a guy who misses his flight?

How about a story about a guy who misses his flight because he’s a knucklehead!?

Gary likes to think he’s an expert in all things airport because for a while he had a family in one city and a job in another and he spent a lot of time in airports.  If you want someone to talk about carry-on vs checked bags, how many ways to fold a suit into your shoes, or zzzzzzzzzzzzzzzzzz…..

Now did you catch the hilarious part of that last sentence? Gary says, “Be at the airport at 4:30” Dave gets Siri to help him leave the office at 4:30. Which means he has to get from the office to the airport in… uh… let’s see… ZERO MINUTES!

That was the sweatiest, most stressful drive of my life, trying to balance the anger at the other drivers with the shame of my mistake.
So I walk into the airport at 5:13, too late.

I went up to the Westjet desk and said, “I’m sorry – I’m an knucklehead and I just missed my flight.” I had visions of a judgment and a bill for a last-minute flight for a billion dollars.
And this is what happened.

The guy at the Westjet Desk, let’s call him Dwayne (I think?) (I was stressed)  looked at me and says, “Well that must feel stressful – let’s see what we can do.”

He took my passport, clack clack clacked on his keys, then said, “What if we got you on the 6:30 flight – would that work?”

“Sure,” said Dwayne, smiling and handing me a boarding pass. “Have a great flight.”

“Don’t worry about it,” he said, “There’s room on the flight. We all make mistakes.”

And that was that.

As I sat in the gate waiting for my flight, I thought about Dwayne. I was probably the 15th person that day who came up flustered, angry, confused or lost – and somehow, even though I was the 15th person, he didn’t judge me, he didn’t try to teach me a lesson, he just fixed the problem.
Now it happens that Westjet is a sponsor of DKL, I can say for sure that Dwayne had no idea that I had any relationship with Westjet, no idea that I tell stories for a living. I was just a guy who missed his flight.

I know this because the name on my passport is John David Kelly – and he called me “John” the entire time.

And he made it all good.

And that’s why I wanted to write this and say thanks Dwayne – and thanks Westjet for getting me back on track and not making me feel like the knucklehead I was pretty sure I was.