Searching for a song with Danny Vacon and Dojo Workhorse

Posted at 23:08h in Featured, Uncategorized by admin

Burton Cummings is going to be honoured this weekend, which makes me think of the songs he has that have stuck. “Stand Tall,” “Break it to Them Gently” and one of my classic summer crank it songs, “My Own Way To Rock.” (Seriously, the organ solo gets me every time – it starts at 2:25. Not that I play it a lot or anything.)

But for the past few years one of the songs that has stuck in my head is a tune by Danny Vacon.

The first time I met Danny was a few years ago and I was interviewing him for a podcast. (it’s here) In advance of the interview, I was doing a bunch of research on him to discover that he’s an amazing guy with the best beard in rock (sorry ZZ Top) and everything he writes is cool and smart and compelling. 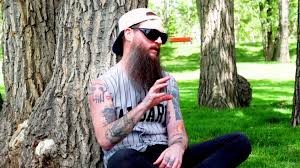 I listened to a bunch of the Dudes stuff, some of the Dojo Workhorse stuff, watched a bunch of videos, and then came across a video of him singing this song about love and baseball. Just him and his guitar.

I don’t know why it caught my fancy, but I played it over and over. I loved the tune and asked him about it. “Oh yeah – my baseball tune,” he said. It’s about love and baseball – a bit of a different take on the baseball metaphor than “Paradise By The Dashboard Lights” .

I couldn’t find a recording of it anywhere other than this video, so whenever I wanted to play it, I’d had to search for the video and play that. Which I did. A lot.

And then I got more excited. Because Dojo Workhorse has a new album out. It’s called Come To Your Senseis.

And if you look carefully over the songs, as I did, you will get to the last one. As I did. And it’s called simply, “Baseball.” And I thought, no way… it couldn’t be…

Get the album. It’s awesome.

And come see Dojo Workhorse with me at DKL6 on April 27.

If nothing else, come see the beard.

Strike strike through my heart babe.

Don’t balk at my love, love

We’ve had a good season

Till October came along